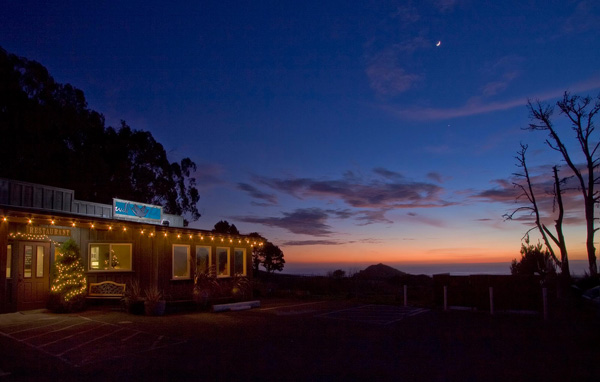 In this “Local Seafood Heroes” series, Fort Bragg Groundfish Association is highlighting local businesses and individuals who share our values and work hard to support local and sustainable seafood.

Overlooking the headlands in Little River, Wild Fish is a hub of delicious local food on the Mendocino Coast, started within this small seafood restaurant.

Opened in 2011 by Liz and Kelvin Jacobs, Wild Fish has established itself as a dedicated supporter and passionate celebrator of the local flavors of the region. True to its name, the restaurant features seafood in all its dishes, always wild-caught from local fishermen. In addition, all its produce, spices, oils, and herbs are organic, and carefully sourced by their team, “working with only local purveyors and harvesting provisions from right outside their door.” These efforts create the unique flavor of this resolutely local cuisine.

“There is a sort of a magic when you start to get local wine and local seaweed and local candycap mushrooms and local fish,” said Liz. “You start to taste the flavors and build associations with things that could only happen in Mendocino.”

The couple previously owned and operated an award-winning restaurant and inn on the west coast of England. There, sustainability and local food were an essential part of their work. Now, the location of their work has shifted to a new coast – but their commitment and passion remain the same: “to procure and serve only the finest, sustainable ingredients.”

“We left England wanting to start a restaurant in California because we thought it was the perfect place for us,” said Liz. “People here were already into the whole sustainable food discourse: Where does it come from? Is it organic? Is it local?”

Hoping to settle on the Mendocino Coast, the couple discovered this small restaurant space available in Little River. The location was on the ocean side of Highway 1, under the same roof as the local post office. It was meant to be theirs – and it was destined to be, according to the Jacobs, a seafood restaurant. The view of the Pacific Ocean from the dining room is magnificent. “We had really no intention of doing only fish until we saw that place,” Liz laughs today. 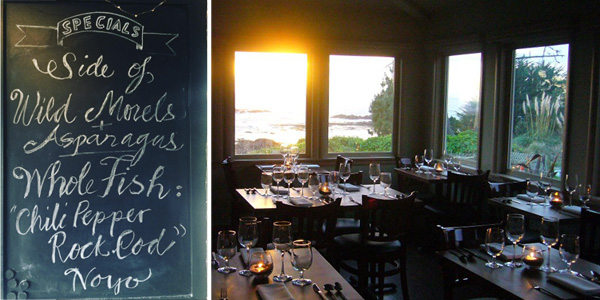 Once Kelvin and Liz settled on their location, the most important work lay ahead: finding and navigating the local landscape of food purveyors, growers, and harvesters.

With the Pacific Ocean at their doorstep, they had not expected that finding locally-caught fish would be a challenge. But as many local residents can attest, it is remarkably difficult to find verifiable local seafood for sale on the Mendocino Coast. Kelvin and Liz soon found that they would need to dig deep into conversations with local distributors and suppliers in order to be true to their commitments.

“There was a bit of surprise on the end of the phone when I kept asking where everything was from… And if the answer was Fiji or the Gulf Coast or simply ‘I don’t know’ – then I’d say, ‘No no, I’m just not interested in that,” she recalled. “It seemed that we were  some of the first people in our community to push these conversations.”

Slowly but surely, the Jacobs found sources for the deliciously local seafood that they knew existed – from sablefish to local salmon to diver-picked uni. In addition, they pushed to connect firsthand with individual fishermen in the area. From Little River to Fort Bragg, they posted notices in the local post offices and down in the harbors requesting any fresh and local catch. Since fishermen need special licensing to sell directly to restaurants, this often provided its own challenges. “We are very determined to have just very few but very important principles that we work with,” said Liz. “All local and only wild caught.”

The restaurant’s menu is inspired by this local catch – preferably from nearby Mendocino and always from the West Coast. It changes with seasonality and availability. On one mid-summer day, guests might choose from crispy skinned King Salmon with roasted fingerling potatoes and rainbow chard – or Whole Fish of chilipepper rock cod, spiced and roasted on a cedar plank with baby carrots and rainbow chard.

Chilipepper rock cod (rockfish) is one example of a truly local fish that Wild Fish features. It is a groundfish that is only found on the West Coast, caught by trawl and by hook and line off the coast of California. When caught by members of the California Groundfish Collective, like those in the Fort Bragg Groundfish Association, the chilipepper rockfish is certified by Seafood Watch as a “Green – Best Choice.”

“We would go down to the harbor, literally standing on the docks, and wait for boats to come in,” Liz said. “We’d go and buttonhole these fishermen and say, ‘Hey there, would you sell some fish to us?’”

Over the years, they have developed relationships with fishermen and allies that understand their dedication to sustainable sourcing. Today, one of their go-to suppliers is Noyo Fish Company, owned by Scott Hockett in Noyo Harbor, which shares a passionate commitment to locally sourced seafood. Up to three times each week, Scott’s company delivers fresh seafood – often live fish – to the kitchen at Wild Fish. “Scott is just as crazy as we are! He’s just a champion. He doesn’t bat an eye,” Liz said.

In the dining room, there has been a similar shift as locals and visitors enjoy this delightfully different restaurant experience. Wild Fish enjoys introducing guests to less conventional kinds of seafood – like the delicacy of uni or the thrill of a whole fish. The restaurant’s staff is trained to coach guests in how to best enjoy these new dining experiences. “Sometimes we have to hold guest’s hands a little bit,” she said with a smile. “We feel that it’s our job to get people educated and excited about these local resources.” 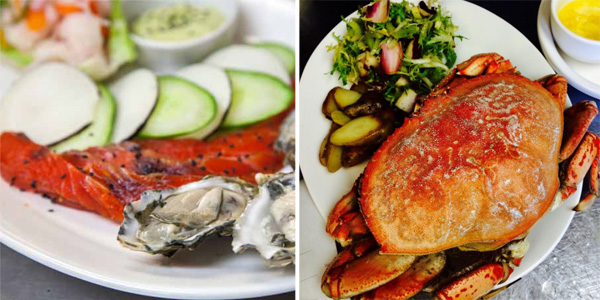 These days, Wild Fish is well settled in its location on the headlands of Little River, and the team continues to work at connecting within the local food community. Looking ahead, Kelvin and Liz hope to expand beyond their current space – for the ability to serve more guests in the dining room and expand their menu in the kitchen. All the while, they remain committed to the local landscape and the people who make this work possible.

“We feel super grateful for the brave local people that are doing what they do and are willing to sell smaller quantities to a tiny fish restaurant,” said Liz. “We are all part of the stewardship of the ocean and of this region.”

To learn more about Wild Fish, visit their website – or say hello in Little River! To follow the “Local Food Heroes” series, subscribe to our FBGA newsletter.